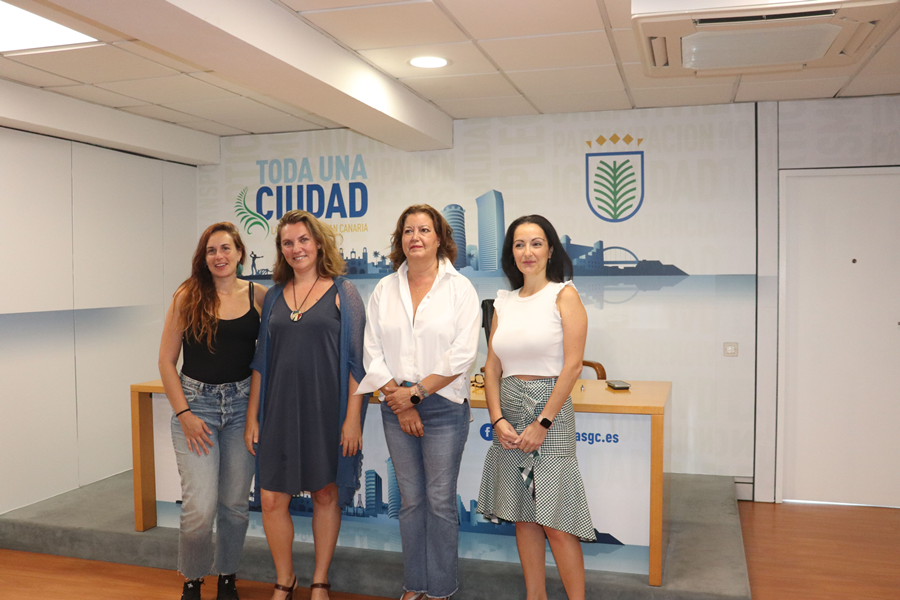 9 primary schools and one secondary school have participated in the campaign ‘Cyberpassport Citizenship for Equality’, promoted by the City Council.

The central short film of the project, starring and based on ideas of the students, promotes “networked” action against gender violence.

Las Palmas de Gran Canaria, Tuesday, August 2, 2022 – Nearly 200 students from nine primary schools and one secondary school in the capital have created about twenty materials for dissemination, awareness and denunciation in the framework of the campaign ‘Cyberpassport Citizenship for Equality’ against male violence, promoted and financed by the Department of Equality and Diversity of the Consistory of the capital.

These materials include a short film, videos, posters, documents and even a poem. In addition, students have joined the community of cyber activists for equality by obtaining a virtual passport that is downloaded after answering an online questionnaire as part of this campaign, which aims to generate critical awareness and co-responsibility in the digital world.

The Councilor for Equality and Diversity of the City Council of Las Palmas de Gran Canaria, Mari Carmen Reyes, presented today the balance of the project and explained that “with this program, we have promoted coeducation for equality and prevention of gender violence in educational centers, both primary and secondary, developing workshops with students and teachers, and the results obtained have shown that it has been a success.”

“The students have designed a whole series of dissemination materials, exhibitions and videos, after having received training sessions and preparation to become the best cyber activists for equality and transfer their knowledge to the rest of their school and family environment,” said the councilor.

For her part, Ana Lidia Fernandez, director of Opciónate, stressed that “Gender-based cyber-violence is increasing at a faster pace both in number and in typologies, affecting younger and younger people. The aggressors are not always adults, they are often acquaintances and are carried out between minors. It is therefore important to promote digital ethics, empathy and knowledge about the consequences and impact on the girls affected as well as an environment of zero tolerance to all types of cyber violence, stop the aggressors and support the victims”.

The short film, recorded in two of the participating centers, condenses with a tone, format and language adapted to their age ideas from students and encourages “networked” action to curb cyber violence. The script is based on a situation in the school playground “that changed everything” and also puts on the table aspects such as cybersecurity, cyberprotection or ways to detect and stop the actions of the aggressor with the joint involvement of everyone.

It is also pointed out, among many other elements, that sometimes we participate unconsciously in macho cyber-violence or other harmful practices, hence the importance of becoming aware of the multiple aspects of this social problem, a digital reflection of harassment and traditional machismo.

The work dynamics included theoretical and practical training sessions, a self-evaluation, the elaboration of the main video of the campaign and actions devised and developed by these cyber-activists of the present and the future.

Among the latter, there are eight audiovisual works, materials that address aspects such as stereotypes, the differences between healthy and toxic relationships, drawings, posters, advice on how to be responsible cybernauts or documents that highlight that 5 out of 10 women have suffered some kind of cyberviolence, among other data.

In addition, the project’s web page (https://opcionate.com/es/ciberpasaporte-por-la-igualdad-participantes-ayuntamiento-lpgc/.) contains various materials, a ‘Quiz’, the central video -starring the students- and a poem. In short, the program has encouraged the participation of the educational community of Las Palmas de Gran Canaria to germinate the idea of the need to recognize the individual role in preventing and acting in situations of male chauvinist cyber-violence.

The ultimate goal was to give the participants the possibility and capacity to share and generate contents that promote equality between women and men in the Relationship, Information and Communication Technologies (TRICs).