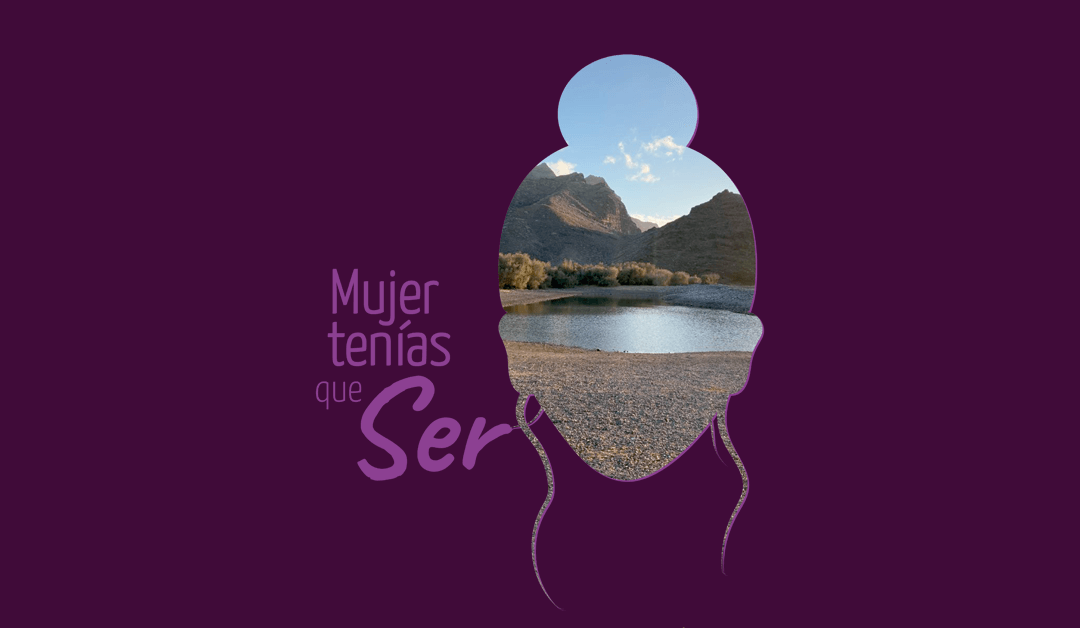 The website and the campaign of which it forms part are part of the municipal project ‘La Aldea Infinita’, within the III Equality Plan of the City Council, funded by the Department of Equality of the Cabildo of Gran Canaria.

In addition to the website and social networks, the campaign has expanded its reach and with it the participation through programmes on local radio and television, as well as with its approach to schools, institutes, the centres for the elderly, adult education and people with disabilities, the street market and the involvement of various associations and groups in the municipality.

“Now that I have the opportunity to talk about you publicly, I will take advantage of it to shout from the rooftops how brave and hardworking you were”, proclaims Carmen Delia about her mother, María Teodosia. This is one of the seventy testimonies collected on the interactive website of the campaign ‘Mujer tenías que ser’ of La Aldea, through which the village society has been able to show its admiration for the female population of the municipality.

In addition to these messages and photographs posted on the website by the men and women of La Aldea, dozens of drawings have been produced by the educational community and are also displayed on the website https://www.mujerteniasqueserlaaldea.com/, a platform that is still open to citizen participation. Its social repercussion has also translated into thousands of impacts on Facebook, Twitter and Instagram in the form of views, shared content, ‘likes’ and comments.

The website and the campaign it is part of are part of the municipal project ‘La Aldea Infinita’, within the III Equality Plan of the City Council, funded by the Department of Equality of the Cabildo of Gran Canaria, and its implementation has been entrusted to the Opciónate Association in order to highlight personal qualities and the social and economic value of the work of women villagers through employment and care.

“I want to tell you how much I admire you,” Juani says of her sister Maite, of whom she has shared a black and white photograph as a child. “When she was only two years old, mum got very ill in bed and you had to be the mother of four sisters”, she recalls. Aurelio, for his part, stood emotionally in front of the camera with a portrait of his mother Angelita, now deceased. “To my mother, for taking care of me, for teaching me and for her eternal love”, he writes in simple words that nevertheless thread a whole life together.

“I admire this woman because despite being widowed at a very young age, she brought up her three children. She worked in the packaging warehouse and also sewed clothes at dawn in order to earn a decent wage,” Yazmina illustrates about Maria in another of the testimonies that make up this symphony of stories with which the villagers have filled the campaign with meaning.

The participation of the children’s community is evident in the section ‘Like a girl’. In each creation they have expressed which village girl or woman they admire after downloading a template, drawing the picture and then photographing or scanning it to post it on the website.

One of the aims of the ‘Like a girl’ section is to banish the sexist stereotype that suggests that being a girl or doing things like a girl implies something negative. In this way, the Town Council promotes that girls living in La Aldea can choose their professions taking into account their preferences and needs, without being affected by existing gender stereotypes. In this context, the drawings have included mothers, teachers, nurses, sisters, grandmothers or music teachers, among many other links and professions.

The ‘Quiz’ and the video summarising the campaign and its achievements

In addition to the website and social networks, the campaign has extended its reach and with it the participation through programmes on local radio and television, as well as by reaching out to schools, colleges, senior citizens’ centres, adult education centres and centres for people with disabilities, the street market and the involvement of different associations and groups in the municipality.