The diagnosis of the Popular Universities has been presented 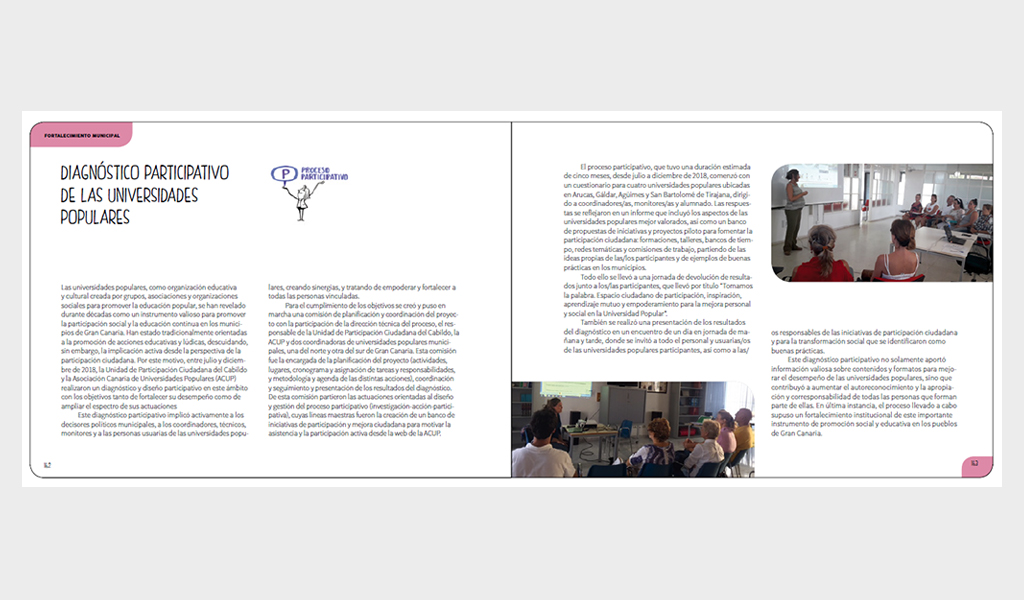 The city of Las Palmas de Gran Canaria hosted the presentation of the Diagnosis Study of the Popular Universities of the Island, a research carried out by Opciónate and promoted by the Canarian Association of People Universities (ACUP) and financed by the Department of Citizen Participation of the Cabildo of Gran Canaria.

The Canarian Popular Universities are key agents in the social and cultural dynamisation of the Canarian municipalities. With the encouragement and support of the local councils, and mostly grouped in the Canarian Association of People Universities (ACUP), the popular universities promote social participation and continuing education of citizens. Their initiatives are developed in 23 municipalities on the islands of Tenerife, Fuerteventura and, mainly, Gran Canaria.

The non-formal training of adults is an essential part of the activities of the adult education centres, whose educational offer is increasingly varied and includes vocational training for employment, courses and workshops aimed at specific groups, computer literacy, robotics and also activities that are not strictly educational (school support, exhibitions, celebrations, space for meetings between citizens…).

This diagnosis arose from the interest of the Canarian Association of People Universities in finding out the opinions and assessment of the main actors involved in the People Universities in Gran Canaria about their objectives, their management and their educational offer and other activities. The aim was also to identify key proposals for drawing up a plan of future action in the short, medium and long term.

To this end, a proposal was submitted for funding to the Department of Citizen Participation of the Cabildo de Gran Canaria, which consisted in the elaboration of a participatory diagnosis study with a sample of four People Universities of Gran Canaria (Agüimes, Arucas, Gáldar and San Bartolomé de Tirajana) over a period of 6 months.

The process of defining the project and the tools for carrying out the participatory study began in May 2018 by a commission set up for this purpose and which included the entity in charge of coordinating the project, a representative of the Canarian Association of People Universities (ACUP), a management representative and a technician from the area of citizen participation of the Cabildo of Gran Canaria, and political and technical representatives of the four selected popular universities.