Opciónate participated in the Networking, Sustainability and Creativity Seminar together with specialists from several European countries. 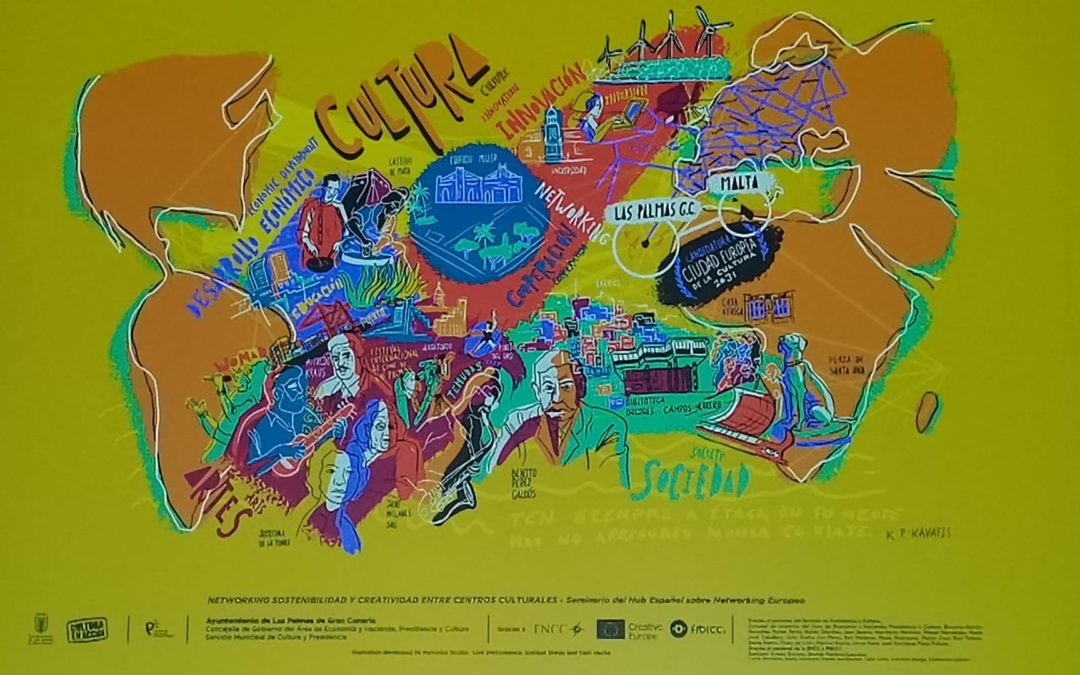 It brought the gender vision to the process of creating the network of cultural centres.

The organisation Opciónate participated in the Seminar Networking, Sustainability and Creativity to support the creation of the future regional network of Spanish cultural centres. Opcionate´s coordinator Ana Lydia Fernández-Layos, did a presentation on the work of gender impact assessment in the cultural policies and actions of the City Council of Las Palmas de Gran Canaria. The City Council has been the organiser of the meeting together with the European Network of Cultural Centers, which has the support of the Creative Europe Programme.

The event took place in Las Palmas of Gran Canaria on the 29th and 30th of June and brought together some fifteen specialists in the field of cultural management from various European cities and regions, as well as from Argentina.

The meeting stressed the need to revive the role of cultural centres in communities, while addressing the impact of the crisis on cultural participation and the development of cities, as well as the formulas for creating strategies to consolidate a more resilient and sustainable cultural sector.

The event also aimed to exchange best practices and networking models of European, regional and national cultural centres and to deepen the skills and competences needed to create a successful European cooperation project.

Everything took place in the heat of round tables, training, open spaces and guided tours in a dynamic designed for mutual learning and exchange of ideas in the framework and spaces offered by a city as open, cosmopolitan and deeply linked to all aspects of Culture as Las Palmas de Gran Canaria.

The programme included presentations by the architect Sabine Zimmerman, involved in the promotion of intersectional cultural projects in the German region of Hildesheim; Milan Vračar, president of the Kulturanova Association; Lapo Bettarini, director of the Regional Network of Cultural Centres of Brussels (La Concertation); Leen Vanderschueren, coordinator of the Network of Cultural Centres of Flanders and Brussels; Piet Forger, in charge of the Department of Culture of the city of Leuven in Belgium; and Nicolas Combes, deputy director general of the World Heritage Site Saline Royale d’Arc-et-Senans in France.

In addition, Daniel Azzopardi, artistic director of Spazju Kreattiv, Malta’s National Creative Centre, gave his perspective on cultural management; and also participated, Ivo Peters, Belgian founder of the ENNC; Austrian Petra Eckmayr, head of membership management at IG Kultur Österreich, an association of independent cultural centres and initiatives in Austria; Dagna Gmitrowicz, a trainer with experience in the field of non-formal education; and musician Søren Søeborg Ohlsen, professor at The Royal Academy of Music in Aarhus.

Other speakers included were Cristina Ortega Nuere, Scientific Executive Director of the World Leisure Organization (WLO) and lecturer at the Universitat Oberta de Catalunya and the Universidad Europea Miguel de Cervantes; Tere Badía, who holds a degree in Art History from the Universitat de Barcelona and a Master’s degree in the Information and Knowledge Society from the UOC’s Internet Interdisciplinary Institute; Vittorio Bianco, coordinator of European projects for the Rete delle Case del Quartiere network in Turin and for other non-profit organisations; and, finally, Helga Massetani Piemonte, national professor of Visual Arts at the National University of Arts of Buenos Aires.

The city council of Las Palmas de Gran Canaria, candidate city for the European Capital of Culture in 2021

coordinated the conference and presented the different cultural spaces of Las Palmas de Gran Canaria and some of the main actions for 2021. These included the Palacete Rodríguez Quegles, the Castillo de Mata Museum, the Miller Building and the Elder Museum of Science and Technology, as well as the historic quarter of Vegueta, a heritage and cultural icon of the city, and activities such as Musicando and the Municipal Library Network.