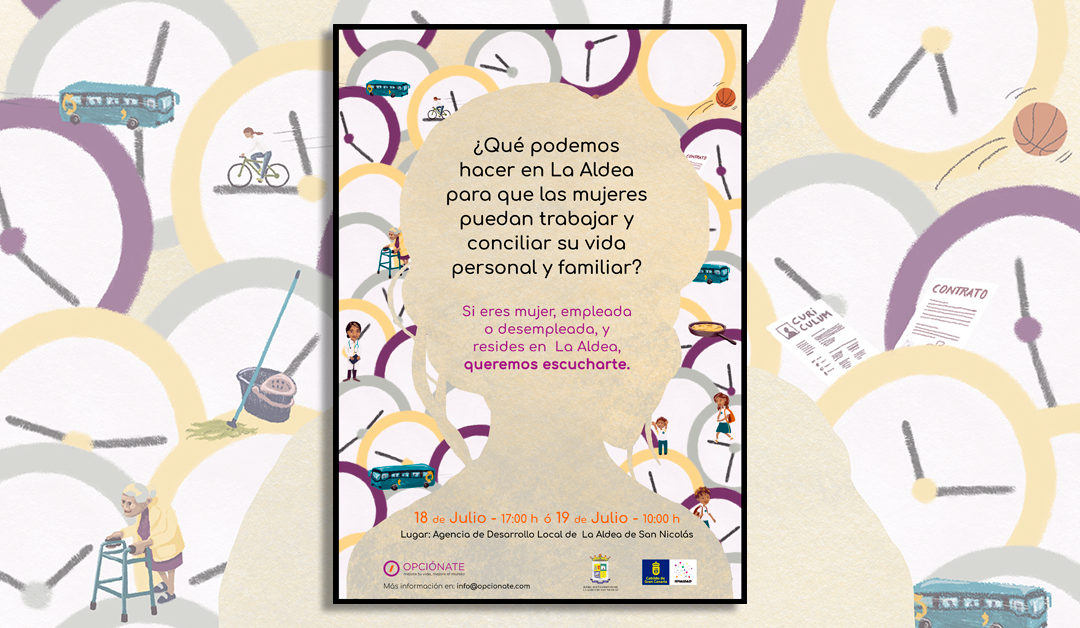 The workshops will take place on July 18 and 19 at the Local Development Agency within the framework of the project ‘La Aldea Emplea’.

You can choose between the afternoon session on Monday or the one on Tuesday, which will take place in the morning.

The City Council of La Aldea de San Nicolás has summoned the women of this municipality of Gran Canaria to participate in training workshops designed to identify and contribute with ideas that could contribute to solve the main problems encountered when it comes to find a job, in addition to reconciling work with family and personal life.

The workshops, aimed at employed and unemployed women, will take place on July 18th and 19th (Monday and Tuesday) at the Local Development Agency of La Aldea de San Nicolás, and you can choose between two sessions: the first day from 17.00 and the second from 10.00. They will last approximately three hours, with a break.

The initiative is part of the initial phase of the ‘La Aldea Emplea’ project, which will last until the end of 2022 within the actions of the III Equality Plan of the Aldea de San Nicolás City Council promoted by the Department of Social Welfare, Solidarity and Equality, directed by the Councillor Yazmina Llarena.

The project is financed by the Council of Equality of the Cabildo de Gran Canaria within the Strategic Framework for Equality ‘Gran Canaria Infinita’ and its development has been entrusted to the Optionate association, specialized in projects in this field.

Among the main objectives of ‘La Aldea Emplea’ are the promotion of co-responsibility in care tasks, making an ‘x-ray’ of the current reality and the search for formulas that pave the way for the employability of the women in la Aldea.

The workshops are based on a question open to all attendees: What can we do so that the women of La Aldea can reconcile their work, personal and family life? To do this, the participatory and group dynamics will encourage the women themselves to collectively build their own story of their relationship with employment, identifying the opportunities that exist and the limitations they encounter with a special focus on conciliation and the care work.

Likewise, based on this diagnosis of problems and difficulties, joint reflection will be promoted on possible initiatives or alternatives that minimize problems and difficulties and enhance existing opportunities and resources, taking into account the different profiles according to their different realities depending on of age, number of sons and daughters, dependents or situations of special vulnerability, among many other variables.

‘La Aldea Emplea’ will also rely on an interactive web space open to the entire population of Gran Canaria to collect the vision of the island population, in addition to personal and group interviews, as well as a focus group that will lead to a diagnosis that it will be the sum of multiple realities, perspectives and experiences.

In order to increase social awareness of collective co-responsibility in care, the population will have the digital space ‘Quiz’ at their disposal to answer a questionnaire or contribute new questions, experiences and suggestions at the link https://mujerteniasqueserlaaldea.com /quiz/

In addition, workshops on care will be held with schools, caregivers and social entities with the participation of speakers and workshop leaders. Likewise, training sessions will be held for teaching staff with proposals for activities for different ages on care. Support for caregivers will be accentuated with specific meetings with experiential and participatory dynamics.

This work will shed light on the reality that is lived in La Aldea in a general landscape in Spain where it is observed that for every man who leaves his job for family reasons, 27 women do so (INE), or that 83% of people who care for dependent people are women, according to the White Paper on Dependency.

In this same sense, in 57% of Spanish families it is the man who performs the paid work, and the woman the unpaid care work and, in fact, according to Oxfam (2020), “the value of the unpaid work of the Women triple technology spending globally. In Spain, the unpaid work carried out by women accounts for 14.8% of GDP (ILO, 2018).

‘La Aldea Emplea’ aligns with various essential elements of the Gran Canaria Infinita Framework, Axis III on attention to working conditions, poverty and living conditions of economically vulnerable women and diverse groups, as well as Axis IV, focused on the sustainability of life, care and inclusive spaces, and Axis VI for the transformation of roles and areas in which discrimination, invisibility and devaluation of women persist.

Likewise, the project contributes to the implementation of the III Equality Plan of the City Council and specifically of the general objectives of favouring labor insertion in conditions that facilitate conciliation, with special attention to vulnerable women; the increase in opportunities and resources for conciliation as a strategy for female employability; and the improvement of the conditions in which care is provided and received, thus favouring equality, dignity and co-responsibility.