8M Half of the women in Gran Canaria have suffered a situation of male chauvinist cyber-violence of a sexual nature, according to a pioneering study in the Canary Islands 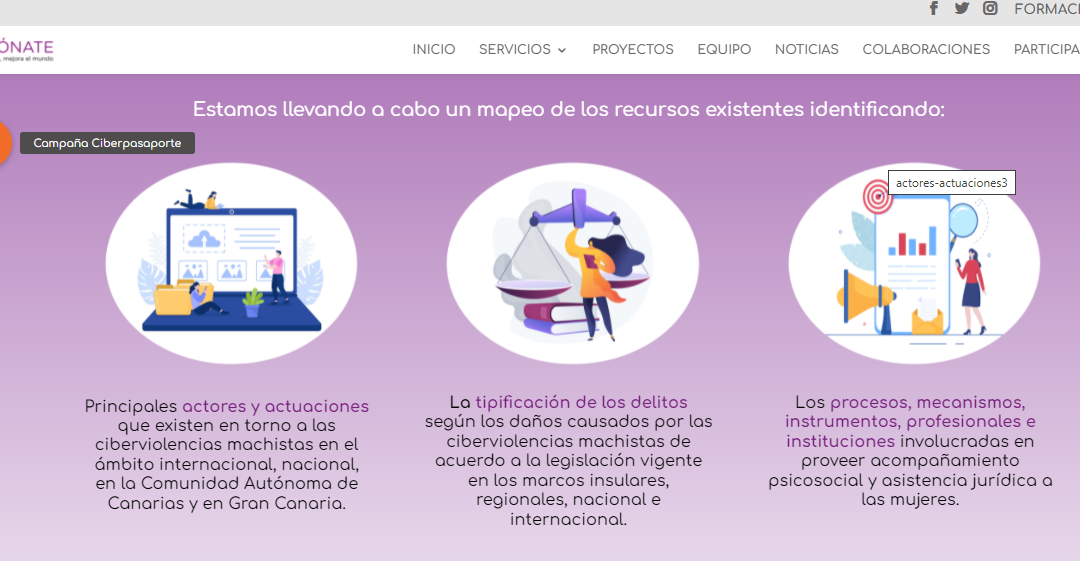 The research ‘Ciberviolencias machistas: un análisis de la realidad actual de Gran Canaria’ was based on an online survey of more than 300 women, personal interviews with those affected and a focus group with professionals.

Practically all of them, 98 percent, encounter sexist content and situations in the digital world, more than 70 percent very often.

A pioneer study in the archipelago reveals that 50 percent of women in Gran Canaria have suffered at least one situation of macho cyber-violence of a sexual nature on the Internet and social networks and another 16 percent say they have a friend or acquaintance who has experienced this virtual reflection of machismo.

This is one of the data provided by the research of the project ‘Ciberviolencias machistas: un análisis de la realidad actual en Gran Canaria’, designed and developed by the Opciónate Association to know its impact on the island and strengthen the mechanisms of prevention, protection and denunciation. The initiative has been funded by the Department of Equality of the Cabildo.

In addition, the data collected show that almost two thirds of the female population interviewed have experienced (36.9 percent) or know (29 percent) a woman in their environment who has experienced cybermachismo in their relationships.

And all of this in a digital environment where practically all of the women surveyed – 98 percent – have encountered macho situations and contents, frequently in more than 60 percent of the cases.

These results are the fruit of a line of supported research carried out from September to March, which included an online survey of more than 330 women in Gran Canaria, in-depth interviews with women who have experienced male chauvinist cyber-violence and a focus group with representatives of local, island and regional institutions.

The research reveals that women often feel and perceive the virtual environment as a hostile space. “This is evident from the interactions themselves in these media, where 68% of the women surveyed believe that in virtual spaces people are more violent than in face-to-face,” summarizes the document in its conclusions.

Moreover, this situation is perceived as “significantly worse for women, as shown by another majority (60 percent) who agree that the Internet and Social Networks are a space of violence against women and girls”. 73.6 percent think that the simple fact of being a woman is “one of the motives or characteristics that give rise to cyber-violence”, below others such as sexual orientation and ideology.

In the specific case of male chauvinist cyber-violence of a sexual nature, it crystallises especially in the repeated receipt of emails, images or sexual messages without having asked for them, or continuing to insist on a sexual conversation after having asked them to stop.

“These approaches”, it stresses, “range from the relatively innocent invitation from strangers, although continuous and widespread, to sending inappropriate content (photopenes), insults or aggressive responses when they are rejected, or appropriating and using personal or professional data (given to access other services) for these approaches. The means, beyond contact applications, include social networks, including those aimed at the professional sphere, instant messaging applications or e-mails”.

On the other hand, the most recurrent situations of cyber-violence that take place in the sphere of couple relationships are checking mobile phones to monitor calls, WhatsApp or contacts, or using social networks to monitor what was done or with whom.

Thirdly, the sexual objectification of women, sexist and misogynist content and comments, and attacks for defending feminist ideas stand out among the examples of machismo that persistently emerge in the digital world.

Moreover, there is a perception of a double criminalisation of women: discriminatory treatment, humiliation and aggressiveness in the face of content created or shared by women, and violent sexist judgement based on gender mandates. As one of the interviewees said, “it is always an insult as a woman”.

Likewise, the research concludes that “age is a key factor in the experiences of male chauvinist cyber-violence”, which are more common among the younger female population, probably as a “mixture of a greater use of technologies, social networks and applications, socialisation as a ‘digital native’ generation, but also linked to the perception of risks on the Internet, especially for women, and a greater resistance to leave the spaces”.

The study also found that “self-censorship or self-exclusion from spaces is an aspect that affects women’s right to participate in the online environment”. Linked to this situation, and deserving of special attention, is the blaming in the social imaginary of women who suffer these situations for “not having adopted sufficient preventive measures” or “for having let that photo or video be taken”, which is interrelated with the messages of prevention and protection to avoid situations of macho cyber-violence.

Resource guide and proposals for action against gender-based cyber-violence

Another relevant detail of the study is that “just over half of the women in Gran Canaria surveyed said that they would know where to go to file a complaint in the event of gender-based cyber-violence, or in other words, 44% of the women surveyed would not know where to go”, which reveals a significant gap in the chain of reporting and protection. In this sense, the project promoted by Opciónate has also included the elaboration of a resource guide.

The women and organisations that have participated in the research have left on the table a series of proposals for tackling gender-based cyber-violence that place special emphasis on incorporating this problem into gender equality education and awareness-raising.

As a result of this study, a greater visibility of this scourge is also proposed, which will contribute to the identification of gender-based cyber-violence, the promotion of healthy and healthy use of social networks and the internet, the promotion of reporting and active protection, as well as the denormalisation of this type of sexist content and attitudes online.

It is also urged to seek the involvement of social networks and digital platforms, to press for the revision of policies of good use, to incorporate warnings about what content violates women’s rights or the management of anonymity, among other actions to dislodge sexism from the vast spaces it occupies in the digital world.