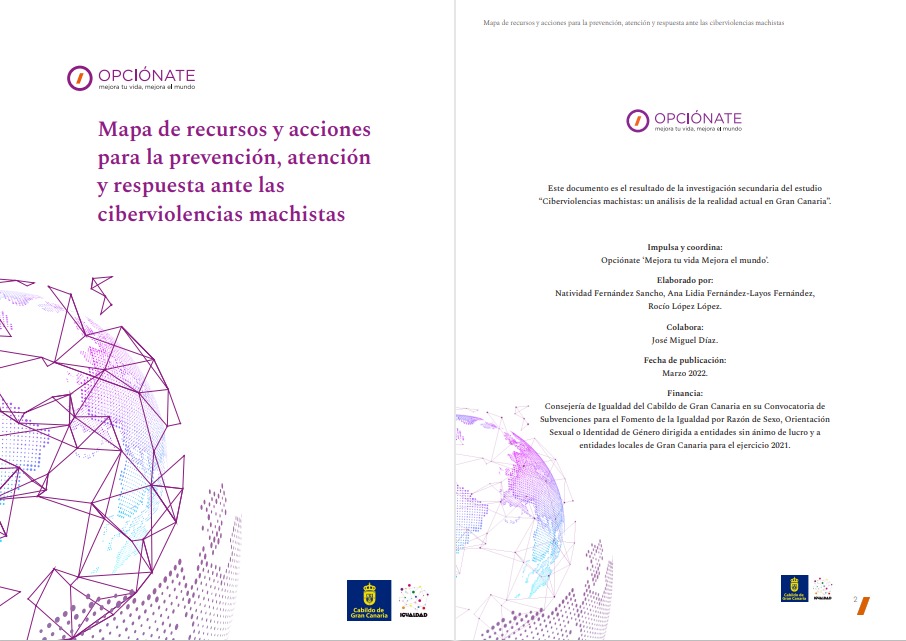 The association Optionate has made available to the public on its website the contents of the ‘Map of resources and actions for the prevention, attention and response to sexist cyber violence’, a document that brings together concepts, definitions and typologies, in addition to the regulatory framework, the typified crimes associated with these situations and the main agents and institutions working in this field in the world, Spain, the Canary Islands and Gran Canaria.

The initiative was supported by the Equality Department of the Cabildo de Gran Canaria as part of its strategy to promote equality based on sex, sexual orientation or gender identity and will allow obtaining specific data on lines of prevention and action, as well as the needs to face the problem with greater guarantees in the island territory.

The ‘Map of Resources on the Prevention and Attention to Sexist Cyberviolence’ emphasizes that the typology of concepts linked to this social problem “expands as technology evolves” and that “it is important to highlight that in the same act of violence several of the attacks described can be combined, which contributes to increasing the impact on the victim”.

Along these same lines, the document highlights the existence of “major challenges” since “despite the fact that regulations are adapting to new realities, in practice digital technologies are evolving at a pace that is far ahead”.

Likewise, the map summarizes the basic international regulations, within the scope of the United Nations, the European Union, and the Council of Europe, as well as the Spanish and Canarian regional regulations. It also shows that the Criminal Code “contemplates a series of crimes that punish some of the forms of cyber violence, although not all of them.”

Finally, the document refers to and includes links to the main national protocols and to the documentary resources, guides and tools that complete this work, conceived for its general dissemination but specially designed and developed to be useful for any individual or entity that must address investigations, protocols, projects or even situations directly related to this scourge.