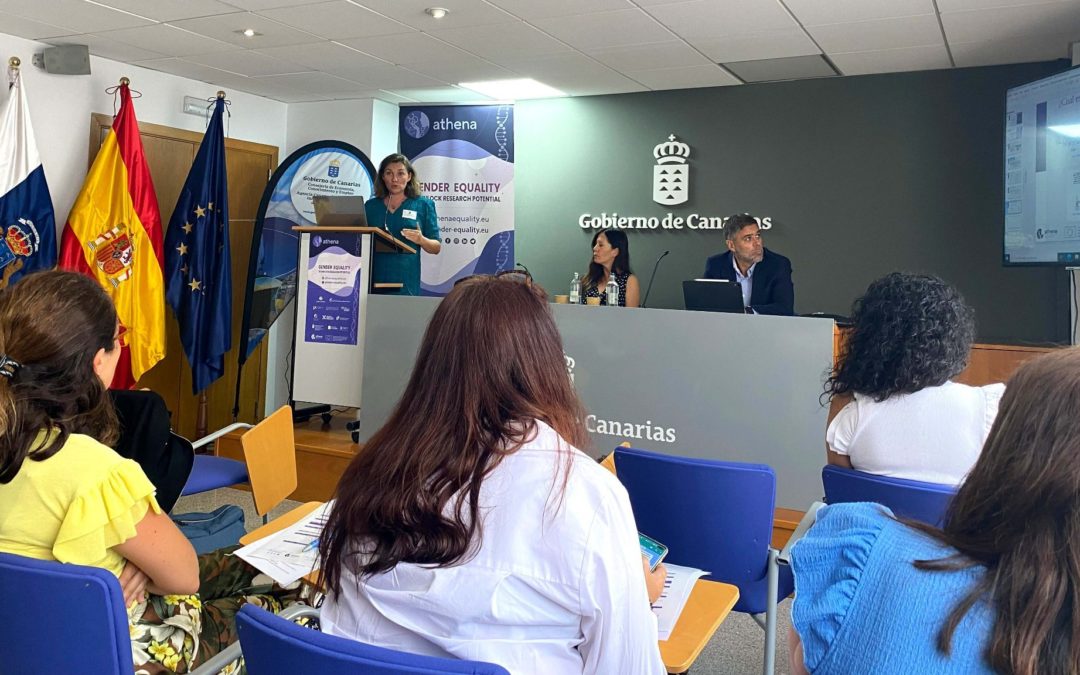 The organization Opciónate has participated in the seminar ‘Gender equality in research and innovation in the Canary Islands’ with an intervention in which its director, Ana Lydia Fernández-Layos, gave an overview on the importance of gender equality to unlock the potential of research in the archipelago.

The event, organized by Consulta Europa, took place in the premises of the Government of the Canary Islands in Las Palmas de Gran Canaria and included the presentation of the proposal for a Gender Equality Plan by the Canarian Agency for Research, Innovation and the Information Society (ACIISI), an initiative that has been developed with the technical support of Opciónate.

ACIISI is a partner of the European project ATHENA, funded by the Horizon 2020 programme, with the main objective of achieving the empowerment of women in the field of research with the promotion of mainstreaming gender in the structures of the institutions involved.

The event was held on June 16 and was attended by specialists in science, research and innovation from the Islands and the Peninsula, as well as representatives of entities that attended in person or online.

The head of R&D&I projects of the ACIISI, Javier Roo Filgueira, opened the forum and followed by the director of Consulta Europa, Michelle Perello, who presented the main lines of the Project ATHENA.  In addition, Patricia Jiménez, technician of the ACIISI, detailed the measures foreseen within the Gender Equality Plan of the entity.

Finally, Perello moderated a debate on the objectives to be achieved through the plan and the expected impact of the gender equality measures established in the proposal in which specialists and entities from the field of science and research in the Canary Islands participated.

Among others, the discussion points covered the existence of other measures that could be included in the ACIISI Plan, specific actions to facilitate its implementation and possible indicators to measure the expected impact.

The Opciónate Association also participated in February in the International Conference of the Athena Project, financed by the European Union, in which organizations from Slovenia, Portugal, Romania, Italy, Slovakia, Bulgaria, Poland and Spain have established a partnership with a duration of 4 years between 2022 and 2026.